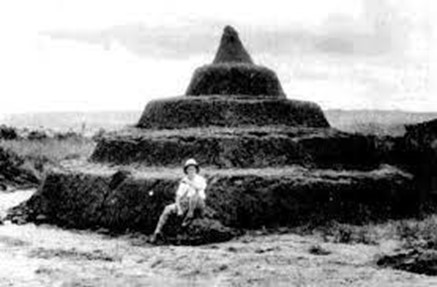 Nsude Pyramids: The Pride of Ancient Igbos - by Ego Mbagwu

Nigeria is not ordinarily associated with pyramids. There were the groundnut pyramids in Kano, but the story usually ends there. Egypt is the country that is symbolized by its pyramids in most travel publications, like the Eiffel Tower defines France. Both structures contribute considerably to the national income of their respective countries.

Therefore, one must marvel at the Nsude pyramids in Nsude, Enugu state, on the Onitsha–Port Harcourt expressway just before 9th mile. On the left-hand side, from Onitsha to Enugu, the area where they used to be can be seen at the foot of a low hill, densely wooded and quite distinct from the surrounding grassland.

Wikipedia refers to the pyramids as ‘one of the unique structures of Igbo culture.’ It is described as having ‘a first base section that was 60 ft. in circumference and 3 ft. in height’ with additional circular areas on top of it, each area being smaller in circumference than the one before. These continued to the top, which was in the form of a cone. There were ten pyramids built of ‘hardened red mud and clay,’ which ‘were laid in groups of five parallel to each other.’